An image for Icaria


Why the name Icaria?

This name was chosen when my daughter was starting to go on different children web sites. Since I didn't want her to use her real name, we came up with Icaria. At the time she loved the story of Daedalus and his son Icarus.

Daedalus created the Labyrinth on Crete, in which the Minotaur was kept. King Minos, not wanting Daedalus to spread his knowledge about his creation, had locked him up in a tower, preventing him from leaving the island by sea. Daedalus, the great craftsman that he was, fabricated wings for himself and his son Icarus. These where made of feathers and fixed at the base with wax.  They escaped but Icarus flew to high and the heat of the sun melted the wax. He fell into the see and drowned. He had not listened to his father's warning. 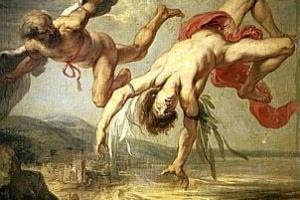 While trying to imagine what Icaria would look like, I remembered a 1954 Stanley Donen movie, Funny Face. In it, the beautiful Audrey Hepburn played the role of a young librarian who "reluctantly" became a model. The key moment of the movie, Hepburn coming down a monumental staircase, wearing an iconic dress from the history of cinema. A red dress designed by Hubert de Givenchy. The place, the Louvre museum in Paris with on top of the stairs, la Victoire Samothrace!


The Victory of Samothrace seen here, is a 2,45 m high statue, discovered in 1863 and is one of the many great masterpieces wich can be admired à the Louvre Museum in Paris. A beautiful woman with wings instead of arms, she is the allegorical representation of a military victory. A woman with wings! What could be more perfect? 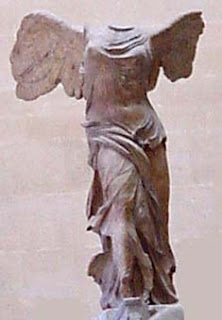 To know more about both The Victory and the mythological tale: