This body lotion is one of my staples!

I can't remember when I bought my 1st bottle but I do wish I had used it sooner. This was not a brand my mom used. She was more into Estée Lauder's products and perfumed body lotions like Dioressence and Miss Dior which where her favorites. As a teen and in my 20's, I used some of Vaseline's offerings and J&J's Baby Lotion. That was until I had enough money to go towards department stores brands. Although I did enjoy perfumed body lotions like my mom, they where not always suitable for everyday use. My favorites in those days where from Clarins an Biotherm. 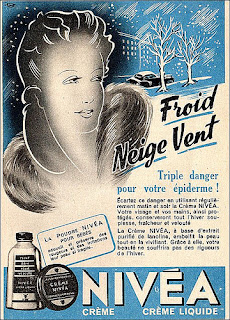 Silly but I think that the main reason I purchased a bottle of Nivea was because of it's look. It had an Art Deco feel, with classic straight lines, dark navy blue with a white pump, it was known as Original Moisture. It would seem the name varies since my current bottle is named Extra Nourishing Body Milk but on the British website it's called Rich Nourishing Body Moisturizer. If you want to try it and you definitely should, just go for the dark blue bottle.

Sadly they changed the bottle a few years ago for a more feminine curvy shape. Although they've added the Hydra IQ 24h+ logo on it, it feels the same. Marketed for dry to very dry skin, some find it greasy. I don't. I guess I must have dry skin.

The fragrance, that beautiful comforting fragrance has bergamot, lavender, orange and lemon. Rose, lily of the valley and jasmine. Iris and heliotrope with amber and musk undertones. Although a bit strong at first, 30 minutes or so later it becomes soft and subtle. On me, it lasts a few hours but the moisture lasts all day.

It penetrates quickly, leaves a silky feel on my skin that is not sticky. Comfort!

For those who want a good drugstore priced body lotion, I just can't rave enough about this one. I've tried others from Vaseline (as mentioned), Olay (can't stand the fragrance), St-Ive's and other more obscure name brands and none have given me the results I get from Nivea. Soft skin that lasts at least 12 hours. It does say 24 hours on the bottle but that's stretching it a bit for me.

Current presentation of the Canadian version

MakeupAlley, 4.2/5 lippies for 23 reviews
Now here it's reviewed under several names but the average score remains roughly the same.