Olfactive Memories, The one that Seduced Me...

I know some don't believe in that phenomenon but trust me when I say, I was literally hit by lightening the first time I saw André! I was getting in the elevator of the building where I lived accompanied by both my parents... I froze! Dang did I feel like a girl! Oh wait! I was a girl! I mean that first time I saw him I was six months shy of 18!

Wow! Just wow! The dude lived in my apartment building and yes, I almost did *faint*.

In French we call it: Coup de foudre and yes, I was hit hard!

The classic tall, dark and handsome dreamy looking guy! Always well dressed with a lil' somethin' extra... Well as we got closer the following spring that little something extra was, among other things, his fragrance...

The first men's fragrance from the house of Dior was created by Edmond Roudnitska who was also responsible for Diorissimo and Diorella. Launched in 1966, it's an uplifting juice composed of strong notes of lemon, rosemary and spicy lavender for it's opening and closing with the sexiness of oak moss, musk, vetiver and amber. 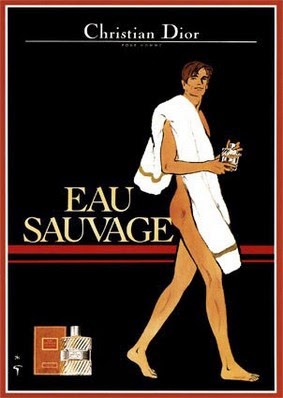 This was the fragrance André wore that first summer we were together! Manly but yet romantic. Virile but not in a "in your face" kind of way. He had self confidence to spare but was never ever condescending, always respectful of others, especially of me...

Compared to some of the popular men's fragrances today, Eau Sauvage could appear to be a little too tame, unadventurous and even a little old school but back then it was extremely popular, a top seller! Me I only cared about the way it smelled on him! After all, what did I know about men's perfume at 18!

Today would have been his birthday and yes, both Catherine and I miss him for he was the center of our universe! Truly he was!

I didn't think it would but yes, life does go on! Catherine is doing great and he would be so proud of her. She's becoming a beautiful young women with a good strong head on her shoulders. She's smart, considerate, respectful of others and yes, like her dad, she's very self confident! Quite amazing at 15!

As for me, well, he will always be in my heart and I'm thankful for the fact he has left me with beautiful memories. Thinking about Eau Sauvage has reminded me of so many!

Yes Eau Sauvage seduced me but let's be honest, it was the man wearing it that made it memorable!