The first Color Tattoos were way too shimmery for my taste, the matte were to stiff, hard to swatch and didn't seem very smooth so I passed despite the hype.

These I figured just might have the right texture so...

...Yes I went for them and purchased three! 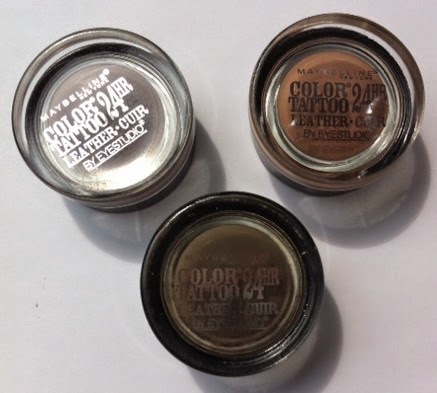 This was almost an act of faith since there were no testers and I hadn't read any reviews (only saw pictures on Instagram), but the colors just seemed so right. I first purchased Vintage Plum and before even trying it on, the next day went back for Creamy Beige and Deep Forest. 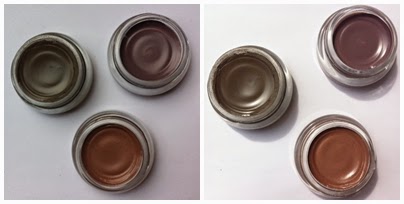 The textures... Both Vintage Plum and Deep Forest feel slightly dry and take some getting used to to work with but Creamy Beige is just dreamy! Creamy as it's name states it goes on easily and truly has that gel like texture as advertised.

Long wear... Over NARS Pro-Prime reviewed here, they all stay put all day with no creasing but do note I didn't try them on their own.

One more thing that's to be noted, I tried a powder shadow over Creamy Beige and it was a little hard to smudge properly. I wanted to deepen it with a dark blue and although the final result was ok it wasn't as flawless as I would have liked. Next I'll try with Diorshow Fusion Mono Matte in Nocturne reviewed, here, which I haven't used much to be honest but I think they should work well together for a classic look with liner.

Here is yet another lame attempt at swatches...

Indoor on the left and in the sun on the right. I think you can get an idea of how both Antique Plum and Forest Green appear a little dry compared to Creamy Beige which shows a faint shimmer. Now of course it will look different on the eyes since on my arm I swatched them over a little foundation. So far I haven't tried them with a brush preferring my fingers. In fact, I'm not sure a brush would work well with Antique Plum and Forest Green because they seem to go on more easily warmed up a little, almost like a stiff concealer.

These for the price are pretty good, especially Creamy Beige. Both Antique Plum and Forest Green require a little more practice to appear smooth but I can work with them and although I haven't purchased any of Maybelline's Color Tattoos from the matte line having only swatched in stores (of course those may have felt dry due to the constant opening of containers), I do think the Leather formula looks more natural, less cakey.

Tempting but I will not compare these to the easy almost buttery texture of Laura Mercier Cariar sticks (I own Khaki reviewed, here) although Creamy Beige is almost there. LM go for $34.00 a pop while Maybelline Color Tattoos are around $10.00 each. That's a third of the price and I have no idea how long I'll be able to use them for I'm sure they will dry up over time but I guess I should be ok using them coming up fall and winter. I give them about a year which is fine for such a cheap thrill. :)

There are two more colors available, Chocolate Suede 95 a deep warm brown with gold specs (for some reason I think that one will have a texture similar to Creamy Beige) and Dramatic Black 100 which appeared similar to the Dior I already own.


Have you tried any of the Maybelline Color Tattoos yet? If so, what did you think?