Recently I went downtown and I bad! Very, very bad!

How bad was I? When I got home, Wallet locked itself in the bathroom and cried the entire evening, that's how bad I was!

I pleaded my case, explaining these splurges where "must haves", they where "basics" I desperately needed for fall but nope, Wallet didn't want to come out...

I mean come on! I only bought three items!

I've already shown to you my Guerlain goodies, here and here. Now it's time to talk about this little "essential"... 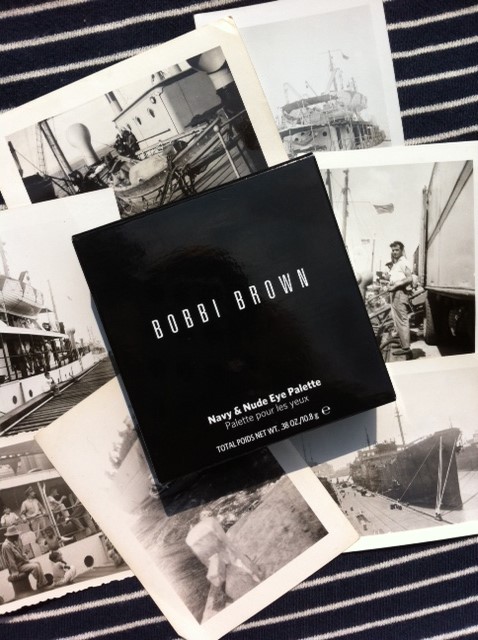 Before I start talking about the palette itself, you probably have already noticed my theme, Navy!

I have many, many pictures of tall ships, beautiful sailing boats that I've taken over the years but I wanted to use my father's pictures from another time...

For some reason, ever since I purchased my Bobbi Brown Navy & Nude eye palette I've been thinking about my dad, probably not only because of the theme but also the fact that this upcoming Sunday would have been his birthday. He was in the merchant marine (marine in French means navy) and although he worked mainly in South America he did end up in Germany during WWII. Odd I know. I won't go into the details but let's just say that I would have loved for him to tell me more about that...

My dad is responsible for getting me hooked on history. As a kid, whenever there would be a documentary on television, he would make me watch it. Of course most times I didn't understand half of it but it made him happy. He told me lots of stories and I can still remember his giddiness when telling me he had placed his hands on the Parthenon in Athens or when he walked amongst the pigeons on Piazza San Marco, of when he was in Venice. Rome, Florence oh and Palermo in Sicily where no sailor was aloud off the ship! The reason, well let's just say that in those days if a man looked at a girl, even in a demure and friendly way, well... hmm, bad things could happen. Remember The Godfather? 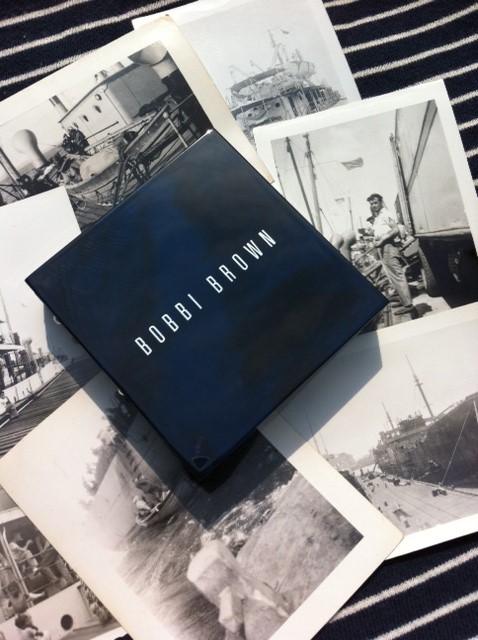 Bobbi Brown Navy & Nude Eye palette comes in a clever "navy blue" & black sturdy compact which cleverly slides open to reveal all the shades. Oh by the way, notice the cutie on the right? That's my dad! 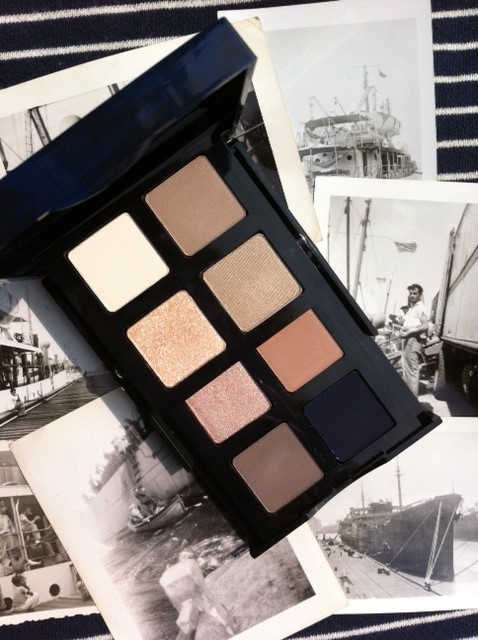 
Could we pass along the message that Navy is the new Black?

This palette does not hold the most original colors and some have criticised Bobbi Brown for repackaging four of her well known eye shadows, others have even said that this palette lacked in creativity and imagination on the part of the brand. I disagree.

This is a great basic, period.

Seven neutrals that can be mixed and matched with any other palette you may already own and one gorgeous dark blue that can truly be worn by everyone.

Ivory: I would not wear it on it's own but I've tried it as a base, under Beige to make it more true and it worked quite nicely.

Cement: probably my favorite as a base color for a neutral every day look.

Blazing Star: sadly this one is a tad disappointing. It's pretty hard and the only way you can get a bit of it on your lid is with either your finger or a sponge applicator. It would have been great for those who like shimmer once in a while but here you'll get just a hint of it.

Beige: on me quite similar to Cement but with a pearly finish. Even if you're on the other side of 40, meaning your lids aren't that firm anymore, this shade will be very flattering.

Twilight Pink: lovely to illuminate on those days you don't want your look to be too matte. It has more shimmer so if your lids are not what they used to be, careful where you apply it. Surprisingly for a non shimmer kind of girl, I've enjoyed wearing it on my lower lid being careful not to bring it up on the side in order not to enhance the "light" droopiness... *sigh*

Naked: another great base shadow but be careful with this one, not too good after a bad night sleep. Even if the warm orangy undertone works well with green and blue eyes, it brings out the red so you must be well rested for this one, believe me.

Slate: love! It's the perfect companion to Cement or Beige to give a subtle dept to my eyes. It can be used for the base of a smokey look but I like to apply it on the edges of my lids.

Rich Navy: matte, beautifully matte! Now if you're expecting a pop of blue you'll be disappointed. On the eyes, it looks one shade lighter than black and so you notice the hint of blue under certain lighting only. I've used it as a shadow on the outer edges of my eyes to enhance my liner on the upper lid and a very light touch of it on my lower lash line. It's quite chalky and it does take some practice but it is after all, meant to be used as a liner. The brush I've used with it is a medium sized slanted brush. I haven't tried it as a liner yet and know you can use it wet without altering the surface. It is very dark so I haven't had the guts to try it as such. As a shadow, the staying power is pretty good for such a color and it fades quite evenly. I'd say it stayed quite deep for a good six hours and again, that was applied dry.

Ivory, Cement, Beige and Slate are part of Bobbi Brown's regular collection and so can be purchased individually. The others are limited editions created especially for this palette. Except for Ivory (I doubt I'll ever hit pan with this one since I know I'll use little of it) the other three have truly become favorites and so I'm very happy to know I'll be able to replace them.

Given all the gloriously beautiful palettes that are coming out this Fall, it may appear a little boring but and it's a big but, I personally needed good quality neutrals for everyday and these will be perfect to welcome any pop of color I might fancy. If you already have a collection of neutrals then this will likely be repeats so you may not need this palette. This is not for the adventurous, artsy makeup wearer.

This palette for me is for everyday, for a nice non-makeup makeup look and the fact that they are lodged in one compact makes it really convenient and easy to reach for in the morning.

Being associated to makeup would have made my dad laugh! I'll tell you a secret about him, he had an extended collection of... foundations!!! From Max Factor to Dior, I kid you not! He was what one would call a man's man but wore makeup every day! Ahead of his time I guess...

... Wallet did eventually come out of the bathroom! A bit thinner from all the spending and crying but at least just in time for me to go buy some ice cream. After all, it is still Summer! :)