A little shameful to say maybe but this is my first time really trying a fragrance from the famous perfume house. I grew up with my nose full of Dior and Rochas for these where brands where my mother's favorites. Not totally clueless, I have tried Shalimar and L'Heure Bleue, tried to make them work for me but with no success and so this is the first Guerlain fragrance that I've worn non stop for almost two weeks. Up to now I was really on the fence about it. 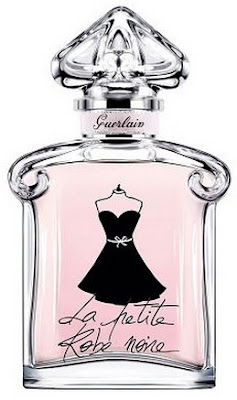 The first few days it seemed very flowery, now, I can only smell the black cherries. There is the hint of almond and smoked tea but I get very little licorice which is what most get and as for rose well, even less.

What I do get is fizzy Cherry Coke!!!

La Petite Robe Noire is very sweet, just like the little black dress depicted on it's bottle, a replica of the classic vials of the brand. To put it simply, I find it teenager sweet! No sultriness, no vampyness and on me, not much depth. The fragrance lasts a good six hours and from beginning to end, doesn't really change. It would seem that my skin's chemistry doesn't enable the development of its different notes.

One would expect a certain level of sophistication given the advertisement campaign but the total takeover of cherries on me prevents it from having the elegance of other fragrances I've tried recently. La Petite Robe Noire would indeed go well with a cutesy dress or when wearing Capri and a pony tail. In fact I'm not surprised that my daughter who is 14 likes it.

Just like its ad campaign which by the way is one of the nicest I've seen in a while, it's girly, feminine and flirty but unless my daughter develops a real taste for it I don't think I would purchase a full size. I recieved my samples when I purchased my Madame Rougit Blush along with Madame Batifole nail polish and at the Guerlain counter where I go they are quite generous with samples so I know I could get my fix if I end up having a craving for it, once the ones I have are empty. It's not a fragrance I would wear every day but once in a while, just like a Cherry Coke, it can be a nice treat but without the calories! :)

Fragrances are such a personal thing and La Petite Robe Noire is a hit for many. It's totally worth trying and who knows, unlike me, you may have the chance to experiment it's different notes. I know that on my daughter it's truly lovely. It's totally a girly fragrance!


I stumbled on this fun video about the making of La Petite Robe Noire. Truly a pleasure to watch.

Have you tried Guerlain La Petite Robe Noire? What fragrance do you wear when you want to feel girly?