I was looking for an elegant compact, one to keep in my purse for discreet touch ups but mainly for quick last minute check ups. Just to make sure I don't have lipstick on my nose or a piece of food, spinach or parsley for example, stuck in my teeth!

These, along with sweaty hands can be quite embarrassing when meeting people for the first time.

I know this will sound a little silly, but for me, a nice compact is a bit of a security blanket and except for the past few years I've always carried one in my purse. The last one to date was from Clinique which I kept in my daughter's... Diaper bag! Since she'll be 14 in June, I guess a new compact wasn't a luxury... I could have gone back to the same old same old but hey, I needed a change!

I went to Sephora. Dior, they didn't have the color I wanted. YSL's was way too shiny and I figured I would always be wiping the surface, making sure no finger prints where showing. Guerlain, they didn't have the Météorites compact. Laura Mercier, Make Up Forever, Bobbi Brown, none looked "elegant", at least not the way I wanted and Sephora doesn't sell Chanel.

I kept coming back to Givenchy!

How could I have missed this one in my Beautiful Compacts post back in November? I have no idea!

The House of Givenchy was founded in 1952 by Hubert de Givenchy, a young aristocrat who had previously worked alongside Pierre Balmain and Christian Dior before they became famous, as well as for Elsa Schiaparelli from 1947 to 1951. In 1953 the couturier met Audrey Hepburn who would become a close friend as well as an ambassador for the brand. Givenchy's first fragrance, L'Interdit was in fact, created in 1957 for the young actress.


Since fashion and makeup walk hand in hand to complete a look, it's surprising to know that Givenchy Beauté, was created only in 1989 by Olivier Echaudemaison then artistic director of Parfums Givenchy.

The innovation of this new cosmetics line, the prisms, those 4 little compact pyramidal squares with which one can create different effects on the skin, depending on if you go with one or mix all. The idea is quite similar to Guerlain's Les Météorites which had been launched with great success two years earlier, in 1987. The difference here is that Givenchy has extended the idea of prisms to eye shadows and blushes. 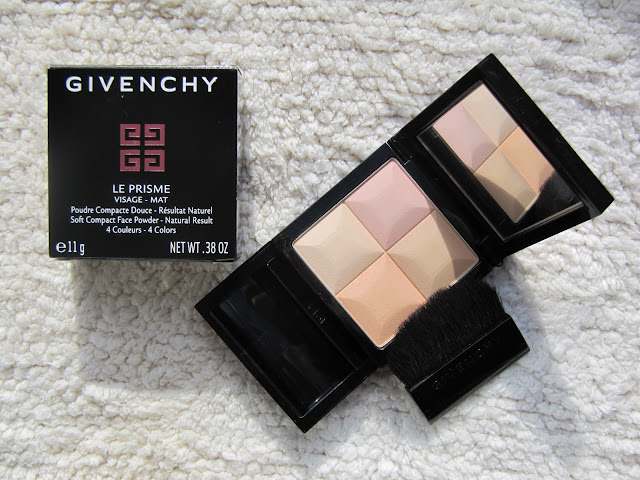 Adorned with the Givenchy logo, the four G's, it reminds me of a little jewelery lacquered box. The ingenious "Clap & Slide" magnetic opening device definitely contribute to it's elegance. Refined and classic, I must admit I feel special every time I use it. 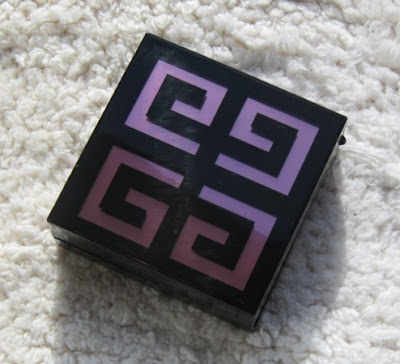 The quality of the powder is outstanding. So delicate, it barely has any fall out, that is if you use it with a good quality powder brush with soft bristles. Some say the one that comes with the compact is too small but personally I find it perfect for touch ups. 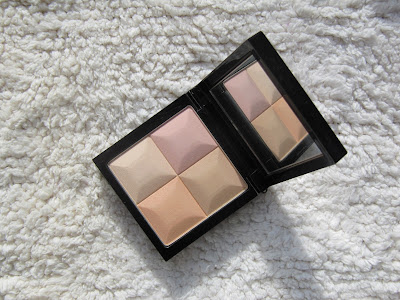 I've never been a fan of compacts that hide the applicator under the powder. It's always a struggle to get to it and the few I've had I've kept home for that reason. Givenchy has figured out a way give quick and easy access to the brush. The sliding mechanism is just brilliant! 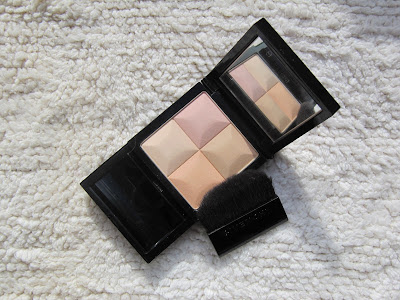 The finish is matte but natural and since the powder is so fine, it doesn't create any white cast. It's invisible but yet it makes a difference on the skin. I chose 83 Peach Plumetis which is the lightest shade and so needless to say that swatches are practically impossible, well,with my camera they are. I'm glad to see that at least it was able to pick up on the subtlety of the four colors. A light pink, beige, coral and a lighter beige. All mixed together they give my skin a nice natural finish. It is matte but natural. On each square you can see the lightest hint of shimmer and this is what makes the difference. In fact I shouldn't use the word shimmer, satiny is much more appropriate. A satin finish, that's what I get with this powder.

This fabulous compact isn't cheap, it's $52.00 but given the fact that the powder is so delicate with hardly any fall out I say it's a good investment since I know it will last a long while. The only negative thing I have to say is I wish it came with a protective pouch. I'll be using one from another compact but still, it would have been nice to have one with the Givenchy name on it.


Some of the information gathered for this entry where taken from Wikipedia and the Musée de Grasse.