It's not unique, in fact there are many similar colors out there and the first that comes to my mind is the one that started it all, Chanel Le Vernis in Rouge Noir a nail polish I've repurchases several times through the years.

February 1947 Christian Dior launched his new collection with much fanfare in his Avenue Montaigne salon. Seen as a breath of fresh air barely two years out of WWII, his New Look helped with the rebirth of French Couture. Although applauded by most there was some controversy surrounding the outrageous amount of fabric required to create the fabulous skirts for there was still rationing in effect in France. Despite this, for that year, Dior's creations accounted for 75% of all French fashion exports.*

Obviously the name, Nuit 1947, relates to the launching of Dior's New Look but ever since I purchased it I keep thinking about a book I read long ago, Night Over Water by Ken Follett (1991).**

Imagine this, Southampton September 1939, with war just declared a Pan American Clipper, the most luxurious airplane of its day, takes off one last time for America. On board an English Lord, a notorious fascist with his family, a Russian Princess, a couple of lovers and a handsome jewel thief... The crossing will take thirty hours with a storm raging both outside and inside of the plane. Suspense, humour, romance...

The title of this book in French is La nuit de tous les dangers (The Night of All Dangers) and yes, Nuit 1947 is a dangerous color! It's dangerously gorgeous, seductive and wow is it vampy!

Years ago Dior nail polishes where my favorites and I owned many of them. I could just kick myself for having thrown them away two years ago when I did a major purge. They were the originals with the white top that was a little awkward to work with but Dior has improved it with a silver cap that once removed reveals a smaller one that is much easier to hold. 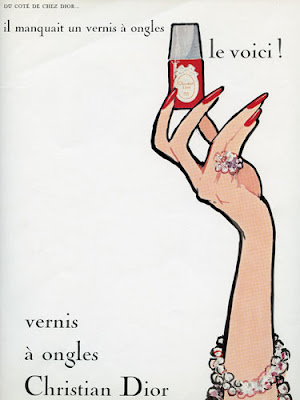 
Dior has also modified the brush and personally I hate it! I have no idea when they did this (I was away for a bit) but now it's flat which is a good thing, but it's way too big! While Chanel's Le Vernis' could be a little bigger, Dior's (and Guerlain's) could definitely be a little smaller.

I'm not a nail polish "applicationer" expert, never been and never will be. This big brush makes the process of applying the color a pain and I've had to re do both index and ring fingers on my right hand. Now this is something I rarely have to do coz even if I'm not an expert, I usually get it right the first time.

Fortunately the formula makes up for this annoying detail, I guess I'll just have to get used to the brush since this will not be my last Dior nail polish. Their colors are just too gorgeous to pass and again, the formula is excellent.

Since it's such a dark vampy red it requires a steady hand to apply. The first coat was just horrible since I put the emphasis on the edges to make sure they looked even. Unless you are an "applicationer" expert, I doubt you could get away with just one coat since I had only two nails that looked good. With the second everything fell into place but make sure you wait for the first coat to be totally dry otherwise the brush will pick some of the color up and you'll end up seeing the surface of your nails.

I did good by the cuticles but the size of the brush made it hard to avoid going over the sides. Fortunately, the formula is thick and so it kind of stayed put. Dior is a little harder to remove from skin than Guerlain so a good quality nail polish remover is required for cleaning up.

Again, no mysteries, dark sexy, vampy red, but and this is a big but, there seems to be two different formulas. Sunny from Mostly Sunny has already written an entry about Nuit 1947 with beautiful pictures (as usual and I'm sooo jealous...). On one of them she spotlights the gentle shimmer... Mine has none! Like hers, the finish is super glossy and almost jelly like but even looking at it with a magnifying glass there is no shimmer whatsoever! Mine is pure cream and I must say, it seems a tiny bit darker. Could be that I applied heavier coats. You can see Sunny's pictures, here.

Since I was anxious to present you Nuit 1947 I ended up having no pictures of it in sunlight because last week was a cloudy one and the only worthy photo I have was instagrammed. Although the color is a little off you can still have a pretty decent idea of the finish. Shiny, shiny, shiny! 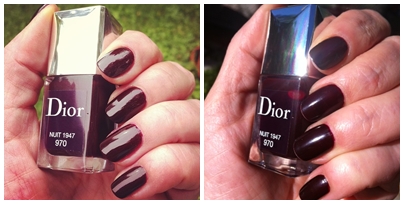 On the left, freshly applied and on the right, five days wear!

On the left the jelly like finish, even if my picture is not that great, is quite obvious. It's simply gorgeous! On the right, notice I do have some tip wear but no chips!!! I'm also quite impressed by the shine after so many days. It kind of looks like an ordinary nail polish would after two days on me. You see two coats with no top coat. I'd say this is a beautiful formula!

So, are there two different formulas? If you know the answer do this please leave a comment. I've tried to see the same color as the one on Sunny's pictures but under every light it looks darker and there definitely are no shiny specs in mine.

Nuit 1947 could be worn by a spy in a movie starring Rita Haworth with a look à la Gilda or how about one with Bogart and Bacall? With Nuit 1947 Dior has revisited a dangerous, elegant and sophisticated era in a verry classy way!


Do you like vampy colored nail polishes? Which is your favorite?

PS: I wanted to take a picture of Chanel Rouge Noir next to Nuit 1947, I've looked everywhere but it seems to have mysteriously disapeared! You can see the original bottle, here.

* To learn more about the beginings of Dior, see Voguepedia, here.