Chanel Lilis had been on my Beauty Envy list for a little while now and I finally purchased it last Monday. The color? The perfect coral! The formula? Well, I'm a little on the fence about it and this is the reason I decided to conduct a little experiment which is why I didn't bring you a review sooner. 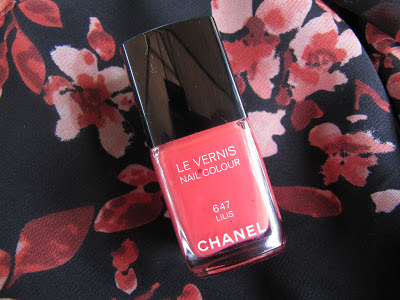 I'm not the best when it comes to nail polish application but at the same time I'm not the worst. So far I've been wearing mainly dark colors on my finger nails. Essie's Recessionista is a favorite and more recently Chanel Taboo which I've fallen madly in love with was previously reviewed, here. I have no issues applying either of these shades. If sometimes the first coat is a little streaky, the second takes care of it and I end up with perfect nails.

This was not exactly the case with Chanel Lilis. The first coat was streaky on some nails and the second coat was not that perfect. Still, I could live with the end result mainly due to the fact that the color is so pretty and it sure wasn't as bad as my latest attempt with a Sally Hansen's formula reviewed, here. 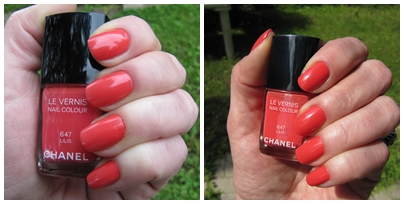 So, I applied two coats of Lilis but with no top coat to see how long it would last. All I can say is that I was more than impressed by it. This week was my "yard cleaning week" so there was some lawn mowing, weed pulling (a lot of that), some branch cutting and a lot of picking up stuff from the ground. Chanel Lilis resisted a full four days to the bad treatment. By the second day it did start to get a little dull which was to be expected but I had no chipping. Yesterday which was the fourth day, I could see some tip wear but not as much I one would think after such bad treatment. 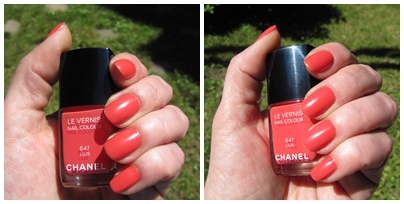 Chanel Lilis on the fifth day.

Since I was going to remove it anyway I decided to do another little experiment. Let's say I want to give my manicure a few more days.

Now do know that I'm not into glitter nor am I much into nail art but what follows is my little attempt at both. Sadly the pictures aren't what I would have liked them to be. Glitter is so hard to take pictures of and with my camera it's quite a pain. 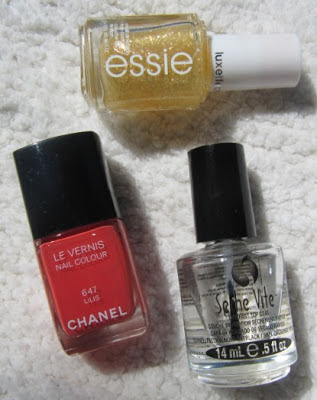 As my base I already had Chanel Lilis. I used Essie Luxeffects in As Gold As It Gets which is a top coat but I still made it even more shiny topped with Seche Vite. 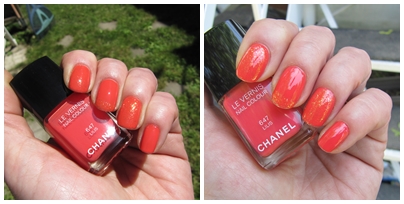 
Now here's what I've decided to do. My intention was to wear Lilis on my fingers and Taboo on my toes. I'll be doing the opposite and for the last few days, may apply some glitter! For some reason I find this more fun on toes than fingers.

Oh, since the glitter is applied on top of cream nail polish, removal is quite easy.

So what do you think? Might there be a little glitter in your future?