Favorite Body Oils of The Moment...

I don't know if it's because Summer is fast approaching (in some parts of the world... somewhere... I hope) but recently I've noticed several entries about oils. For hair, face or/and body, it's a fact that they are gaining in popularity, fast!

I have mentioned before that for years and years, in my teens and twenties I used baby oil (I still do from time to time) at the end of my shower on wet skin, pat dry, soft skin for the day! These days I enjoy avocado, sweet almond and argan oil for moisture, all these, except maybe for argan oil, are quite affordable and I use them freely. The others, the more pricey fragrant ones I have, I use instead of perfume.

If I were to choose a favorite for how it makes me feel, it would have to be Clarins Huile Tonique or Tonic Body Treatment Oil. What can I say, rosemary, geranium and mint make for a smashing combination to wake one up in the morning. It is said to be firming but I never used it for that purpose. Simply for the refreshing effect. On a hot day, apply all over on wet skin, rinse with cold water and wow!!! The sensation is amazing.

I don't have any at the moment but it's on my list to renew. It is on the expensive side at $56.00 and given the fact that if used every day it will last you a little over a month, it can put a serious dent in your wallet. That's why when I have some I only use it a few days a week. Again, not for the firming effect, just for the fragrance and feel on skin. Now Clarins has developed products surrounding this brilliant oil. There is Tonic Bath & Shower Concentrate ($33.00), Tonic Body Balm ($46.00) and Toning Body Polisher ($50.00).

The only downside with Clarins Huile Tonic is that the fragrance doesn't last long enough. I tried the Body Balm to see if it had better staying power but unfortunately it doesn't, barely 30 minutes or so on my skin's chemistry.

These I use instead of fragrances like Eau de Toilette or Eau de Parfum, Lierac and Nuxe each are sold at about $45.00 for 100 ml. and on me they last a good 8 hours. Since they are not as strong as traditional perfumes they are perfect for work or a job interview. With these you should not get on any one's "olfactive nerves". :)

My favorite so far. I bought it on a whim, on a day I wanted to treat myself. I didn't miss there! Composed of hazelnut, sweet almond, grapeseed an argan oil, it's very moisturizing, it's fragrance comes from camelia oil, jasmin and gardenia extracts. I use it on my arms, décolleté and neck. What's left on my hands I use to tame flyaways. Some find it too thick but the thing is with this one very little is needed.

The negative points for me have nothing to do with the oil itself but more with the packaging. First the pump should be revisited. I don't have any problems with mine but I know there are leaking issues for some. Then there is the plastic cap that covers the pump, mine cracked after a month or so. Not great considering this oil costs close to $50.00!

Lierac has created a shower gel with the same fragrance as well as the Eau Sensorielle described as a beauty water to spray any time of day to refresh and moisturize. I've tried it and much prefer the oil for it's fragrance lasts much longer on me.

A staple for so many, I wonder what hasn't been said about this one. It finds itself on so many beauty products lists, best buys, top ten, mythical products, etc. The first time I samples it I'll be honest, I didn't get the hype! I just didn't like it, not at all. I then received a small size in a gift with purchase which enabled me to try it a few more times and it totally grew on me. I love it and for the past few weeks it's the one I've been reaching for in the morning. Lighter in consistency than Lierac, yet it moisturizes just as well.

The fragrance for Huile Prodigieuse was developed by Serge Marjouiller who is also responsible for Armani Privé La Femme Bleue and Thierry Mugler Womanity. It's a brilliant blend of bergamot, mandarin, orange blossom, rose, gardenia and magnolia. It is said to have notes of vanilla and coconut milk but I haven't picked those up. I must admit that my nose is a little out of training and I have been using the same fragrances for such a long time that I can't really comment on specific subtleties. For the moment let's just say that I love it, plain and simple. It also comes in a 50 ml size (as shown on the picture). There is the Gold version which I've tried it a few times and although it appears quite sparkly, it's actually quite flattering, even on super pale skin like mine.

The only downside, as for Lierac Huile Sensorielle, has nothing to do with the product. The 100 ml comes with a metal pump and is of good quality but the lettering on the bottle start to disapear after about a month or so. Notice my bottle on the picture above and how the letters are looking weird? That's from manipulation and I find this a little disappointing even if I didn't buy it for the bottle.

In May 2012 Nuxe launched Prodigieux Le Parfum. For the first time a brand developed a fragrance based on a pre-existing product. It's actually an Eau de Parfum and was developed by the same nose. Hopefully it will cross the Atlantic soon for I'm curious to try it.

I just wrote a review of this oil, here. This is a cheap thrill and since it's so affordable it can be used quite freely. Do note that it's not as moisturizing as Lierac, to which it resemble a lot. A great alternative for Summer. 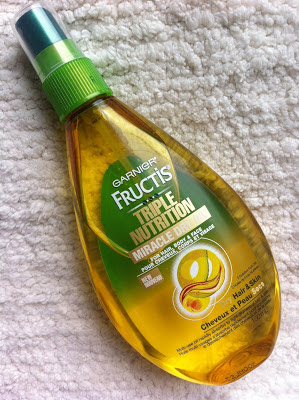 All these, except for Clarins Huile Tonic, can be used on the face. Personally I don't, especially considering the fragrances. As much as I love them I think I would feel sick after 30 minutes or so since they are quite strong. Still I know some do and with great results so it's really up to you. Me, it's a no go.