Nuxe Rêve de Miel for lips, The Stick Or The Jar?

Here I go again with my Rêve de Miel Lip Balm! What can I say except it IS my absolute favorite, so far. In fact it's been the case for at least two years now and that's saying a lot considering all the lip balms I've tried before and since then. I've mentioned this little wonder a few times already, among other places, here. 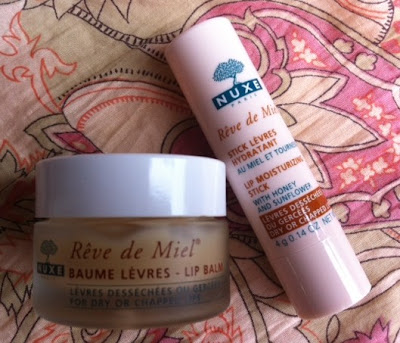 
Is there a difference between the jar and the stick? Yes!

In fact it's almost as if they weren't made by the same company. While the formula in the jar is just simply amazing for me and does give me new lips overnight (I know I'm repeating myself, aaagain), the stick is quite ordinary.

Apparently the stick was tested by 24 women for 28 days in extreme Canadian Cold!

Here goes... I AM Canadian and obviously wasn't asked to be part of the testing process. I would seem that 88% said it protected their lips from the cold and 75% agreed it made their lips soft and supple.

Well, they didn't do this survey last Winter when the entire country was in a deep freeze!

The difference between the stick and the jar? Hmm let me think a moment here... Got it!

It's like comparing Canadian Maple Syrup and Aunt Jemima's!
Anne Rice and Stephenie Meyer!
A Lada and a BMW!
My Old flip phone and my iPhone!

Sorry, over the top, I got carried away and had a little too much fun with this last bit.

The formula of the stick is much harder to spread and takes a bit of effort if you want to lay it on thick. I myself can never get more than a thin film on my lips. The taste is quite faint and lasts about as long as a New York minute! Now this is good for those who don't like their lip balms to have any taste but I quite enjoy Rêve de Miel for that very reason so for me this was disappointing. Now here comes the saddest part, it's not very moisturizing and doesn't stay long on my lips. When I put on the Lip Balm at night I can still feel it in the morning. The stick doesn't last and so you have to reapply every hour or so.

If you want to try Nuxe Rêve de Miel and I strongly encourage you to do so, go for the jar for the stick will not provide you with the same deep moisture. They are not the same and sadly I find Nivea Lip Butters perform better for much less.

A little downer about the Jar...

Apparently some have gotten jars in which the formula was gritty and I must say that a few times it has felt as such. It's as if the "mix" in some jars is not the same or not blended long enough. When I say it happened to me, in my case it was from one jar. Most nights it would go on smoothly and a few times it would be slightly gritty but by rubbing my lips together this sensation disappeared. I don't know if those were bits of crystallized honey or if it was caused by one of the other ingredients but this hasn't deterred me from using it.

Ok so Nuxe is the combination of Natural + Luxury and with this little jar I do indeed feel like I'm using something natural and luxurious. With the Stick, not so much, so again, if you've heard about Nuxe Rêve de Miel Lip Balm, go for the jar. 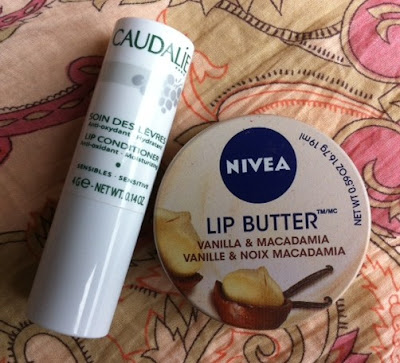 
What is your current favorite lip treatment?